Community Organizing on a Volcano 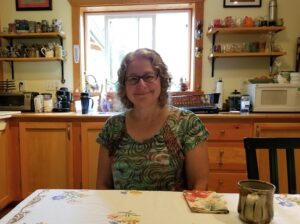 On a Friday evening in late August 2017, just a few miles down the road from one of the only active lava lakes in the world, I quietly entered a room full of American citizens crazy enough to live on a volcano. They were chatting with one another around large picnic-sized tables in a dimly lit basement room of the upscale Kilauea Lodge in Volcano Village, Hawaii. There was coffee and wine and desserts. I poured a glass and sat down as the program got started.

This was the monthly meeting of the recently formed Conscious Coffeehouse – a new space for progressives to exchange ideas and share and learn about issues of concern to their community. It was the brainchild of Elizabeth and Bruce Miller who had envisioned an upbeat, sixties style gathering where people could meet and network and combat the feeling of overwhelm in the face of Donald Trump’s election win.

This evening Kim Miller (no relation to Elizabeth and Bruce), one of the Coffeehouse coordinators, introduced the night’s speakers. The focus was on the environment.

David Tarnas spoke first. Once a Hawaii State Representative (he’s running again for a seat in 2018), David handed out a detailed chart he’d created to track the status of bills in process that summer in the State legislature. I loved this chart. It was the kind of gritty tool a group of concerned citizens could put to good use for advocacy.

At the top of the list was SB559, which requires the State of Hawaii to reduce greenhouse gas emissions in line with protocols adopted under the Paris Climate Agreement. Governor David Ige signed the bill in June 2017, making Hawaii the first state in the country to enact legislation to adhere to portions of the climate agreement.

Up next was Bill Gilmartin, president and co-founder of the Hawaii Wildlife Fund (HWF). Amongst its many projects HWF is courageously combatting the tons of plastic that wash up on Hawaiian beaches from the “Great Pacific Garbage Patch.”

When I interviewed Kim a week later she described the work of the conservation group in heroic terms: “One goal was to clean debris in South Point. The amount of plastic on the beaches there was literally 6 feet high and ten feet across. It was impenetrable.” With a lot of effort, they’ve managed to clear 10-15 tons per year over nearly 15 years. Said Kim, “It’s not in any way pristine, but it’s so significantly different from what it was.”

I was also struck by Kim’s description of HWF volunteers on another project who trek two miles over lava rock to uproot invasive species that are choking the anchialine ponds – “one of Hawaii’s most threatened eco-systems” – then hike back again hauling the plants they’d cut down.

I was inspired by the evening – the shared interest and concern for the environment, the intimacy of the gathering, the warm coffee cake. It was a successful example of the many kinds of groups that have mushroomed into existence this year. 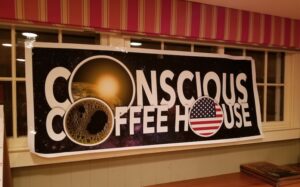 When we spoke a week later, I asked Kim how the Conscious Coffeehouse had formed. She said Elizabeth and Bruce invited people to meet to participate and help give shape to their vision.  “We met and hashed out the details: where to meet, how often, when, what will the programs look like. We asked around the village and Lorna, from the Kilauea Lodge, offered the meeting space downstairs. And a woman who runs a little tea and pastry business offered to bring coffee, tea and pastries…”

They came up with a set of shared values (civil liberties, environmental protection, social and economic justice, women’s rights and gender equality, immigrant rights, voting rights), created a flyer, and someone painted a banner. Each month a couple of coordinators plan the next meeting.

The group is going strong with 30-40 people showing up at monthly gatherings in the Spring, and a few less than that this past summer.

Kim values the person-to-person contact. “I know a lot of people use Facebook or social media to rant or share information. But it’s really, really nice to be able to talk in person about stuff and from that more constructive place of ‘this is something we can do.’ And whether or not it brings the outcome we want, it’s part of a force to push back.”