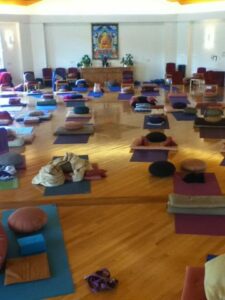 Tonight I begin a nine day meditation retreat at Spirit Rock. Led by one of my favorite teachers, Joseph Goldstein, I’ll spend hours each day sitting with a hundred others in the retreat hall doing traditional vipassana (mindfulness) practices. We will try to focus on the breath, try not to get lost in thought, to bring awareness to sensations, to stay in the present, and to not judge ourselves for not staying in the present, etc…It’s not lying in a hammock on the beach, but I love being on retreat.

A few years ago I was really taken with a contribution Joseph made to the edited volume, A Buddhist Response to the Climate Emergency. He wrote, “We have probably all had moments of what we might call a sudden awakening to the truth of global warming….Yet those moments can quickly pass and the beginningingless habit energies of forgetfulness, other desires, and basic ignorance re-surfaced once again….We need to repeatedly remind ourselves of the situation and not settle for a generalized understanding that climate change is a problem. We need to be willing to make some effort to keep ourselves informed, over and over again, so that we don’t fall back into deluded thinking.”

What he offers about staying aware of global warming to some extent reflects the kind of effort practitioners need to make on retreat. It is relatively easy to stay focused for a few breaths (well, at least the first two!), but after a while the mind loses interest and boards the train of fantasy, memory, planning, etc. and a few minutes later we start all over again on those first two breaths.

Last Friday, Jonathan Watts gave a talk at the UC Berkeley, Institute of East Asian Studies: “After Fukushima and the Promise of Buddhism in the Nuclear Age.” Jonathan is a dedicated anti-nuclear activist and Buddhist. He edited two volumes on Buddhist responses to the tsunami and Fukushima disasters: This Precious Life and Lotus in a Nuclear Sea. Both give first hand accounts of the impacts of the disaster on communities, and community responses to the disaster including protests and building “green tempels.” My writing teacher and friend Louise Dunlap organized the event. (On this site you can read an interview I did with Louise and Joanna Macy in 2010.)

Speaking of unplugging, at the talk Jonathan mentioned that since the Fukushima “triple disaster” in March 2011, none of the nuclear plants have been online in Japan. This despite government support for powering some of the plants up again.

And, to stay true to the theme, I need to go offline now myself so I can get to my retreat. (Unplugging my cords and power strips as I go…)